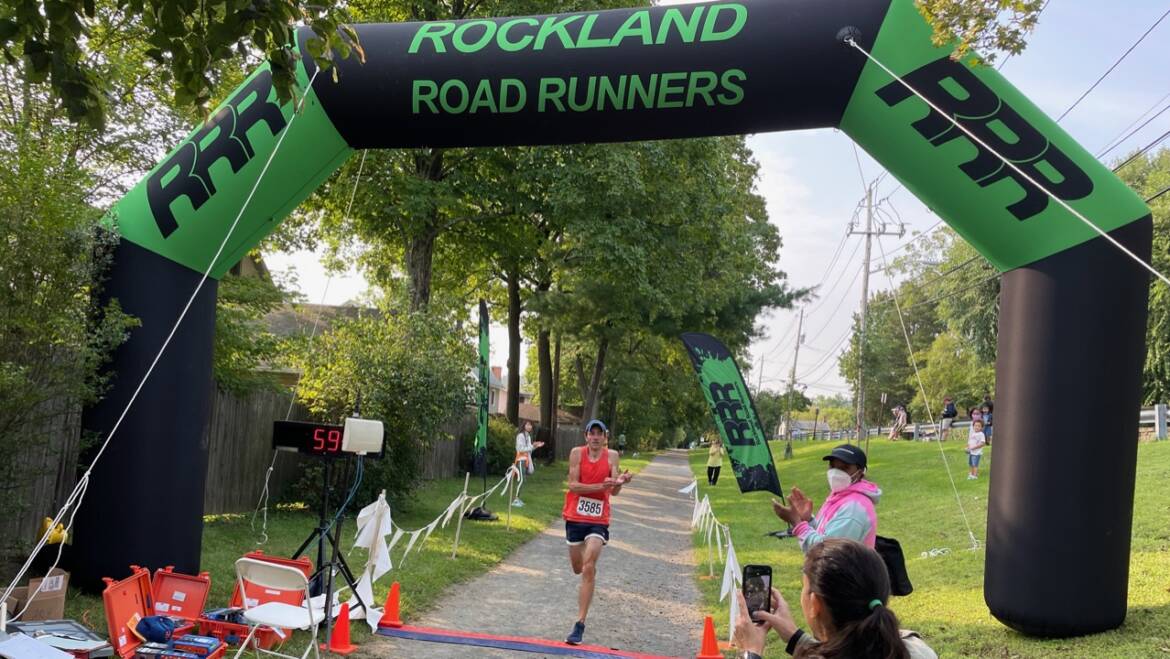 Everything Old Is New Again: So. Nyack Race Returns to its 7.8-Mile Roots in 2022
By Jamie Kempton

The annual South Nyack road race has come full circle, if only for a one-year engagement.
What started out in 1978 as a 7.8-mile jaunt to celebrate the centennial of the village’s

incorporation (1878-1978) returns to its original distance just for this year, on an out-and-
back course traversing the Gov. Mario M. Cuomo Bridge. The race starts and finishes at

Franklin Street Park and incorporates a short stretch both ways on the Raymond G.
Esposito Memorial Trail. This is altogether appropriate since Dr. Raymond Esposito was
the driving force behind the South Nyack race and was its most fervent cheerleader.
Dr. Esposito, a chiropractor by profession and avid recreational runner, served as mayor of
the village of South Nyack from 1979 until his death in October 1985 at age 50. He
conceived the South Nyack 7.8-mile run as a way to showcase the pristine charm and
tranquil beauty of the Hudson River villages of South Nyack, Grand View and Piermont.
The race was held during the village’s centennial celebration on June 3, 1978,
commemorating the June 22, 1878 incorporation of South Nyack as a municipality
independent from greater Nyack.

As reported in The Journal-News in an article chronicling Centennial Day in the village,
South Nyack residents lobbied for independence from Nyack on the premise that their
taxes were being used to subsidize the poorer denizens of Nyack proper. At that time South
Nyack was considered a “suburb” of the main business district in Nyack. After
incorporation, South Nyack thrived as a self-contained village and survived the upheaval
in the mid-1950s when New York State cut a swath through the heart of the village to
make room for the construction of the Tappan Zee Bridge.

By 1978, South Nyack was prepared to honor its century-old legacy as a village with a
daylong festival that had the 7.8-mile brainchild of Dr. Esposito as its centerpiece. The
race started and finished on South Broadway near Village Hall and traced the familiar,
picturesque out-and-back route along River Road in Grand View and Piermont, but looped
around downtown Piermont and returned home without an excursion to the Piermont Pier,
which was added when the race transitioned to a 10-miler.

Winners of that inaugural 7.8-miler were Fairleigh Dickinson University stars Barry
Nelson and Paul Marzan, in 39:21. Our own Donna Hudson of Nyack, who later set
American records in both the 100-mile run and six-day run, won the women’s division in
59:07. Donna was proud to be part of the family’s “Hudson Harriers” running tradition that
included her dad, Alan, brothers Matt (owner of Hudson House in Nyack) and Eddie, and
three of her six sixters – Kay, Barbara, and Vicki.

Within a couple years the 7.8-miler’s date was changed to early September, and the 10-
miler has since been a fixture on the local road-racing calendar on the second Sunday in
September. The 7.8-mile race enjoyed a successful 10-year run under the auspices of the
village before being canceled in 1988 due to staff and manpower shortages. Rockland

Road Runners stepped up to resurrect the race, as a newly minted 10-miler, in 1989 under
the able leadership of race directors Mike Shore and Tom Carroll. Mike Angarola later
took the directorial reins of the 10-miler and ushered it through a golden period of 25-plus
years, during which, he proudly noted, it never rained on race day during his watch! While
we never got rained upon, we certainly got wet during the 2011 edition of the race, when
the remnants of Tropical Storm Lee and high-tide floodwaters conspired to form lagoons
on parts of the Piermont Pier that were almost knee-deep in some sections. That was also
the year a steep detour was put in to avoid a 9/11 memorial service at the firehouse in
downtown Piermont. So much for thoughts of a personal best that day!

Many premier runners have graced the South Nyack course over the years, both in its 7.8-
mile and 10-mile versions. Kathy Culla of Valley Cottage, an Olympic Trials marathon
qualifier in 1984 (2:47:47), was a three-time champion in the 7.8-miler, while former
Rocklander Janice Morra won the 10-miler seven times, a record for women. The
respective course records are, for the 10-miler, an impressive 50:01 by Olympic Trials
marathoner Darrell General, in 1992, and 59:07 by Claudia Camargo in 2007; and in the
7.8-miler, 38:41 by Jamie Kempton in 1980 and 45:55 by Marcy Schwam in 1982.
Among the other notable winners over the years, including elite runners such as George
Buckheit, Abidi Bouazza, Brian Reinhold, Milka Jepchirchir and Mark Will-Weber, one
name stands alone: Art Gunther. Art, an RRR member and resident of Nyack, has won the
10-miler an incredible 21 times in 26 attempts, the majority of his clockings in the 52- to
54-minute range. Now 50 years old, Art continues to support his hometown race and is
still one of the top road-racers in the Hudson Valley region.

In addition to his central role in the founding of the 7.8-miler, Dr. Ray Esposito was the
inspiration behind the creation of the running trail that bears his name, part of the former
right of way of the Erie Railroad line. The trail was dedicated in May 1986, several months
after Dr. Esposito’s passing. Those of us who have enjoyed the serenity of the trail, which
connects to the Old Erie Path traversing Grand View, Piermont and Sparkill, should give a
nod of appreciation to the man who got it all started.

With the dissolution of the village of South Nyack earlier this year and absorption into the
town of Orangetown, we note that while the village no longer exists, the race for which it
is named flows onward like the river it parallels. And, fittingly, just as in 1978, it will be
7.8 miles. Nostalgia fans, rejoice!