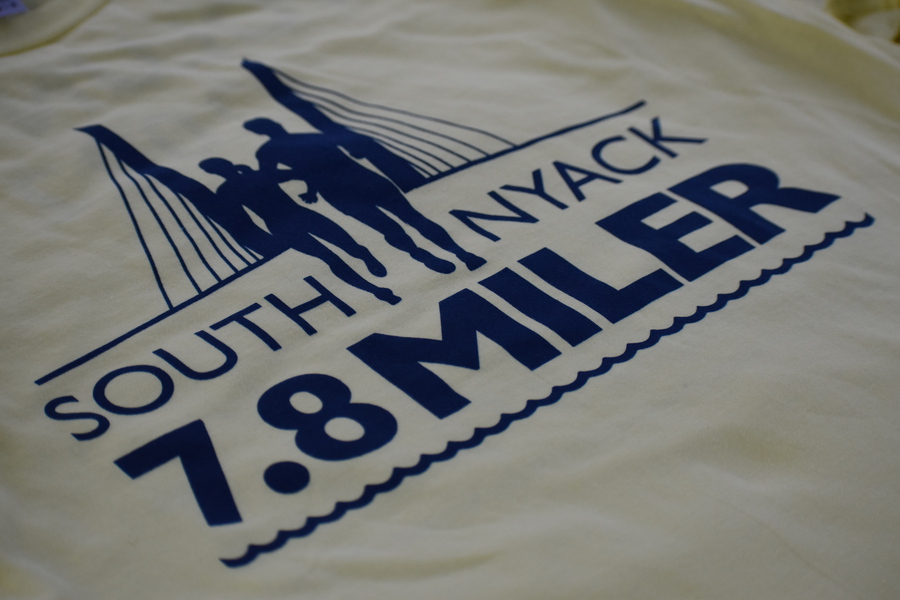 A fixture on the local running calendar since 1978, the South Nyack race took on a special character this year not only by returning to its original 7.8-mile distance – for this year only – but by establishing a number of firsts:
• First footrace to cross the four-year-old Governor Mario M. Cuomo Bridge;
• First person to officially register and compete in the Non-Binary division of a Rockland Road Runners race – Samuel Schultz of Manhattan, division winner in 56:29, a 7:15 per-mile pace;
• First time the race was contested as a 7.8-miler since 1987.

And a poignant tableau witnessed on race day: the sight of 30-plus women wearing pink tops and purple shorts in solidarity with Eliza Fletcher, the kindergarten teacher and mother of two who was killed after being abducted while out for a pre-dawn jog on Sept. 9 in Memphis.

Those ladies joined more than 400 other runners in making history with their footsteps across the Cuomo span, which crosses the Hudson River at one of its widest points, roughly three miles. The first to dart across the bridge and finish back at Franklin Street Park was Kyle Kondracki, a 24-year-old ex-harrier for St. Thomas Aquinas College and son of STAC Coach Ray Kondracki, who supervised a group of STAC cross country team members volunteering at the water station/turnaround at the Tarrytown end of the bridge.Kyle sped through the linear route in 43:15, a 5:33 mile pace, then promptly kept going through the finish chute to complete a long run in preparation for the California International Marathon on December 4.

Kyle’s former STAC teammate, Abbey Kimbrell, 23, of Nanuet, captured the women’s division and placed 13 th overall of 434 finishers in 51:37, a 6:37 per-mile pace. Both the male and female runners-up are veterans of the local road-racing scene. Julie McElroy continues to put up stellar numbers after more than three decades of quality racing. The 55-year-old Sleepy Hollow resident finished right behind Kimbrell in 52:07, a sterling 6:41 pace.

And then there is Art Gunther. The second-place finisher in 44:44 (5:45 pace), Art, who’s now 51, has been the undisputed king of Rockland distance running since the mid-1990s.  Oh, did we mention his dominance of the South Nyack 10-Miler? That race through the riverfront villages of South Nyack, Grand View and Piermont began in 1989 (after a 10-year run for the original 7.8-miler) and was held every year until the pandemic-plagued 2020 season before returning last year. Art’s familiar loping gait carried him to victory an astonishing 21 times in 26 attempts through 2021. A former Tappan Zee High School star and Binghamton University Hall of Famer, Art continues to support his hometown race and can be seen at local scholastic cross country and track meets cheering on his son, Sam, a sophomore at Nyack High School.

It was a privilege for me to present the awards to the top three overall male finishers – Kyle Kondracki, Art Gunther and Efraim Shaw (45:20). Presenting the awards for the top overall female finishers – Kimbrell, McElroy and Alexis De Braganca (54:50) – was none other than Donna Hudson of Nyack, who won the women’s division of the inaugural 7.8 miler back in 1978. Donna later caught the ultra-running bug and went on to establish American records in the 100-mile run and the six-day run. When she was a young girl growing up in West Nyack in the 1950s and early ’60s, she dreamed of becoming an Olympic champion but had no outlet for her competitive spirit since “there was no such thing as a woman athlete when I was going to school,” said Donna, who attended Albertus Magnus High School. She certainly made up for lost time with her ultra-marathoning exploits!

How appropriate that this year’s race incorporated a portion of the Esposito Trail at the start and finish. After all, it was Dr. Raymond Esposito, the former mayor of South Nyack, who conceived and championed the effort to bring the 7.8 miler to the village, in commemoration of its centennial in 1978. While the village of South Nyack is no more, dissolved earlier this year and absorbed into the Town of Orangetown, the South Nyack race continues to honor the vision of Ray Esposito, both in its 7.8-mile and 10-mile iterations.

Mark your calendars now for September 10, 2023, when the South Nyack 10-Miler is set to return in all its glory. And don’t be surprised if a Cuomo Bridge footrace returns at some point, courtesy of the Rockland Road Runners. Stay tuned!